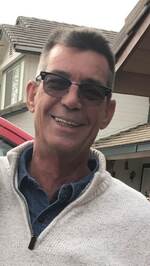 Larry Douglas Rhodes, 62, left this world on Thursday April 22, 2021 at his home in Palmdale, California with his wife, Bari, by his side.

Larry was born in Pilot Point, Texas and adopted by his loving parents, Pastor W.E. and Dorothy Rhodes, he was the first of their two adopted children. He was raised in San Antonio with his sister Sharon, graduated from South San West Campus and attended Bethany Nazarene College.

Having learned the trade of construction by helping his dad build their churches, he started his own roofing company in San Antonio and later moved to California and worked his way up to Superintendent of multiple commercial construction companies. He was very talented at his trade and was able to teach his own son what his dad had taught him.

On his off time, Larry loved nothing more than spending time with friends and family camping, fishing and dirt bike racing. He was an animated storyteller and his enthusiasm was contagious. As competitive racing became less appealing he found great joy in making fly fishing lures, a hobby he was quite gifted in.

In his passing, Larry joins his father and dear friend, Jim. He is survived by his mother, Dorothy, children Aubrey (Aaron) Aumann, Larry (Nina Watson) Rhodes, Jr., and Erin Rhodes, his wife, Bari and her children Jennifer, Nicole, Evan, Casey, by his sister Sharon (Michael) Rickey-McMurray, and by grandchildren, nieces and nephews.